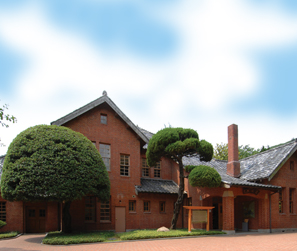 The Provisional Capital Memorial Hall was open on June 25, 1984 to instill pride to the citizens of Busan who bore the duty as a provisional capital during the national crisis and also to commemorate the stature and historical importance of Busan.

The official residence of the president that used to be the center of the building when it was first opened is a two-story brick house which was built as an official residence for the governor of the province on August 10, 1926 when the provincial office of Gyeongsan Province was relocated to Busan from Jinju. When Busan was acting as the provisional capital of Korea (1950-1953), Korea's first president Rhee Syngman used stayed here.

The building itself was designated and managed as a historical monument No.53 in the city of Busan. It is a nice and peaceful place along with a beautiful garden. The exhibition room was reproduced with an atmosphere of that time in order to show that this was the place where all final decisions of Korean politics were made during the Korean War. Since this was also a living place for the president and his secretary, you can peek at the plain living quarters of the president and his ordinary life in inner room, living room, kitchen and dining room.

On Sept. 19, 2012, the former residence of director of the Prosecutor of Busan High Public Prosecutor's Office located behind the president's residence underwent full remodeling and opened as a new exhibit hall. The exhibit hall - a brick house with one basement and one above ground floor - is a permanent exhibition hall displaying the outbreak of the Korean War and the lives of refugees, politics, economy, and culture in Busan during the provisional capital period. The exhibit hall aims to secure new exhibition materials and building of new halls, as well as promotion of Busan's reputation, which used to be that of a refuge capital having functioned as the heart of Korea during the Korean War based on continued development endeavors.

We look forward to your interest and support.
Thank you very much.